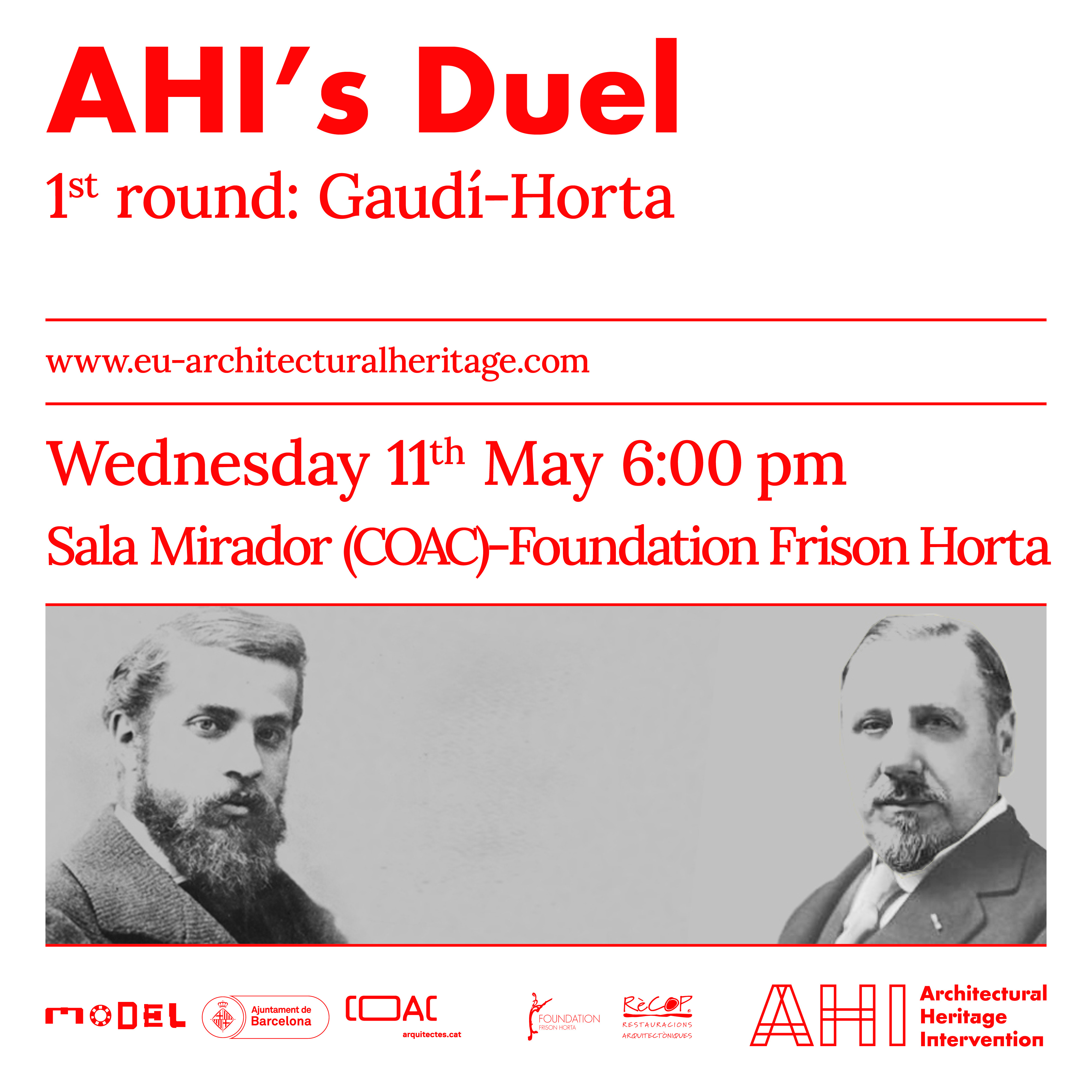 The Architectural Heritage Intervention Duel. Round 1: Gaudí-Horta, at the Model Architecture Festival
On Wednesday, May 11 at 6:00 p.m., as part of the program of the inaugural Model Architecture Festival, an "AHI Duel" on Architectural Heritage Intervention will take place. This first round involves the participation of the Belgian architects Francis Metzger and Guy Conde-Reis and the Catalans Xavier Villanueva and Joan Olona, architect and architectural technologist respectively, who will address the similarities and peculiarities of two emblematic figures of Belgian Art Nouveau and Catalan Modernisme, Victor Horta and Antoni Gaudí.

Architectural Heritage Intervention (AHI) participates in the first edition of Model. The Architecture Festival is a proposal endorsed by the Barcelona City Council and the Architects’ Association of Catalonia (COAC), which has its origin in the popular Architecture Week. The Festival, which runs from May 5 to 15 in Barcelona, aims to transform the urban space into a showcase for emerging architectural talent and design, the city into a meeting place for international thought leaders, and, most importantly, architecture into a space for exploration and inspiration for all citizens.

As a result, AHI contributes to a stimulating discussion comparing and contrasting Catalan Modernisme with Belgian Art Nouveau. The socio-political atmosphere in Brussels towards the end of the nineteenth century was comparable to that in Barcelona, and architecture was striving for new modes of expression that would break with academicism and what was then deemed official. In this context, the Belgian architect Victor Horta (1861-1947) established Art Nouveau in Brussels with his work, demonstrating his most sophisticated facet. Meanwhile, Catalonia became the epicentre of Modernisme, with a growing number of renowned architects, the most notable of whom was Antoni Gaudí (1852-1926). Horta is to Brussels what Gaudí is to Barcelona, despite the fact that they represent opposite aspects of Art Nouveau and Modernisme.

The Belgian architects Francis Metzger and Guy Conde-Reis, and the Catalans Xavier Villanueva and Joan Olona, architect and architectural technologist respectively, will be the protagonists in a dialectical duel centred on the similarities and particularities that bring together or distance the work of the two major symbols of Art Nouveau and Modernisme in Europe, Horta and Gaudí.

Francis Metzger was the winner of the Special Mention for Restoration at the fourth edition of the European Award for Architectural Heritage Intervention (AHI) in 2019, with the Maison Saint Cyr. For this occasion, he will be accompanied by the architect and specialist in the work of Victor Horta, Guy Conde-Reis; Xavier Villanueva and Joan Olona are the joint winners of the Special Mention for Restoration in the fifth edition of the AHI European Award in 2021, with the rehabilitation of Casa Batlló.

Architectural Heritage Intervention (AHI) is a platform launched in 2011 that incorporates a pan-European Award, an international Biennial, a sizeable digital archive with over 1,000 entries, and a Forum that explores this debate. This Forum is an open space that should be viewed from a global and contemporary perspective. It is an invitation to architects, historians, and archaeologists, among others, to engage in a fruitful and enlightening discussion on how heritage is defined in twenty-first-century society.

The event can be followed online at (Language: Spanish): https://youtu.be/AFj_jZx5Vys