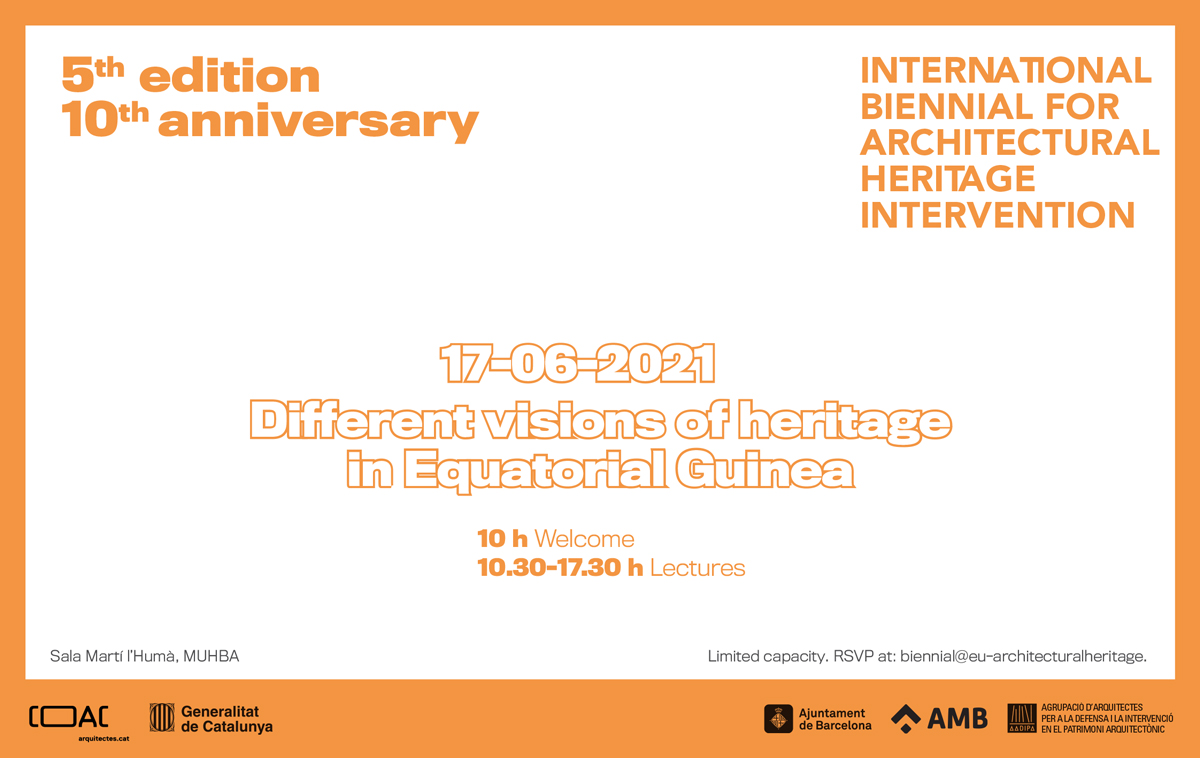 On Thursday, June 17, 2021, the fifth edition of the International Biennial for Architectural Heritage Intervention will take place, which, like the European Award, is celebrating its tenth anniversary with this edition. The guest country for this edition is Equatorial Guinea, and it will be presented at MUHBA in Barcelona, based on the theme "Different visions of heritage in Equatorial Guinea".
The Biennial, organized with the support of COAC and the Department of Culture of the Generalitat of Catalonia is free to register – and in keeping with regulations, capacity is limited – the event will however be streamed on the Award's YouTube channel. Experts from various disciplines of architecture and the world of art will participate in the event, the aim of which is to present a sample of the Equatorial Guinean heritage panorama in the broadest sense, a heritage that draws from the ancestral memory up to the mixture of colonial cultures (Portuguese, British and Spanish) who have passed through the country leaving their mark.
The Equatorial Guinean society is committed to the preservation and rehabilitation of architectural and urban heritage and is working to turn it into an engine of sustainable development for the country. The plurality and richness of its material legacy is another expression of its culture. Strengthening and projecting tangible and intangible values internationally are key to the country’s present and future.
The Biennial, once again this year, culminates with the official presentation of the European Award for Architectural Heritage Intervention. The event will be hosted by the journalist Quim Morales, and a representative of the award's international jury will present the finalists' works and announce their decision for each of the four categories, as well as the Special Mention for Restoration. Finally, the event will be commemorating the tenth anniversary of a project that arose from the conviction that heritage, as a vehicle for social integration and an economic resource that stimulates societies, deserves to be revalued and promoted.
FULL PROGRAM:
Welcome
10.00 h Presentation of the conference
By:
Ms Assumpció Puig. President of the Architects’ Association of Catalonia, COAC
Mr Jordi Domeque Deputy Director of Cultural Heritage of the Department of Culture
Mr Antoni Vilanova. President of AADIPA
Mr Marc Manzano. Co-director of the European Award for Architectural Heritage Intervention.

DIFFERENT VISIONS OF HERITAGE IN EQUATORIAL GUINEA
Equatorial Guinea is undergoing a process of redefinition associated with a far-reaching economic and social transformation. Because of this and a change in thinking, both traditional and colonial heritage have become stigmatised and very fragile. Society believes in the preservation and rehabilitation of architectural and urban heritage and is working to turn it into an engine of sustainable development for the country.
10.30 to 13.00 h. Morning session
The conference will be conducted by Mr Jordi Portal. Co-director of the European Award for Architectural Heritage Intervention

“The New Urban Districts, the development of small towns". (Virtual)
Speaker: Dominica Nchama Minang ntang. Architect in the Ministry of Public Works, Housing and Urbanism of Equatorial Guinea, in the Directorate of Urban Planning and Land Registry

16.00 to 17.30 h. Afternoon session
Presentation by Elena Belart. Architect and Head of the Architectural Heritage service of the General Directorate of Cultural Heritage

19.00-21.00 Award Ceremony
The event will be presented by Mr Quim Morales, journalist

5 editions of the Award and its 10th anniversary

* Attendance to be confirmed

Award Ceremony: Full capacity. It can be followed online at:
https://youtu.be/f4MZ6AsrTKs