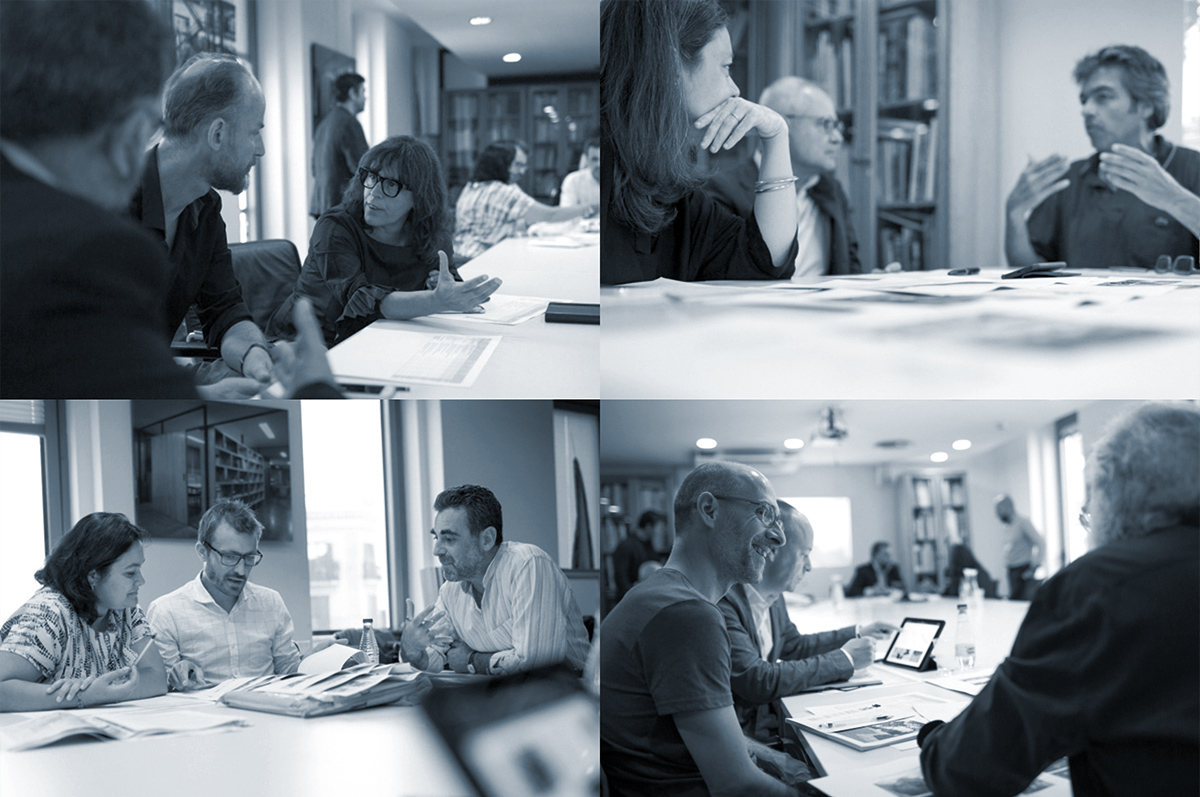 Gathered here today at the headquarters of the Association of Architects of Catalonia (Plaça Nova, 5, Barcelona) are the juries of the four categories of the European Award for Architectural Heritage Intervention AADIPA, composed of the following members:

PRIOR CONSIDERATIONS
During the month of May, the juries of the four categories studied, evaluated and analysed the documentation of the 189 submitted entries (124 in Category A, 35 in Category B, 11 in Category C and 19 in Category D), in accordance with the criteria listed in the terms and conditions of the Award.

The purpose of this initial evaluation was to draw up a short list of entries in each category, from which the winners will be chosen. The short-listed entries are those which have achieved the highest scores in accordance with the criteria and points listed in the terms and conditions for each of the categories. The classification of this initial evaluation does not determine the winners.

In accordance with the terms and conditions of the Award, four entries per category were short-listed in categories B, C and D (including the winners). In Category A, due to the high level of participation, the high quality of the entries and the diversity of opinions in respect of scoring criteria, it was decided to include six entries in the final deliberations.

SHORT-LISTED ENTRIES
In Category A (Intervention in built heritage), after careful deliberations, the jury short-listed the following entries:
064A. Conversion of the Bernardas Convent (Eduardo Souto de Moura)
106A. Cooking School in a former Slaughterhouse (Sol89)
032A. Restoration of the Palace and Gardens of San Telmo as the Presidential Headquarters of the Regional Government of Andalusia (Guillermo Vázquez Consuegra)
068A. Restoration of Es Pi des Català Tower XVIII (Marià Castellò, Architect)
095A. Church of Santa María de Vilanova de la Barca (AleaOlea Architecture and Landscape)
076A. Skjern River Pump Stations (Johansen Skovsted Arkitekter)

Having analysed the 124 entries in the category, the jury notes that the projects, while generally being of a very high standard, present a wide variety of scale, difficulty, ambition and sensitivity. Some of them are characterised by their clear commitment to restoring heritage with precision and accuracy. In this respect, the jury proposes that in future calls for award entries, architectural restoration should be considered as a special category.

In Category B (Exterior Spaces), in accordance with the scores given by the members of the jury, the following entries were short-listed:
033B. Caramoniña Allotments (Abalo Alonso Architects)
027B. Restoration of the irrigation system of the thermal market gardens of Caldes de Montbui (Cíclica + Cavaa)
009B. Pedra da Rá Lookout Point (Carlos Seoane)
017B. Restoration of the Caminito del Rey Walkway (Luis Machuca Santa-Cruz)

First of all, the jury wishes to highlight the high quality of most of the submitted entries, along with the effort that has gone into the interventions in terms of relating to landscapes of heritage value. It also points out that it has identified common project conditions and attitudes in most of the entries that are indicative of the situation in Europe in recent years.

The jury has praised the high level of the submitted entries, the diversity of the interventions, the graphic documentation presented and the different scales of the projects. Two types of entry have been highlighted: those focused on urban planning, conditioned by official regulations and scheduling for their implementation; and those consisting of exhaustive typological studies of complex buildings from different periods. This diversity enriches the category and offers a broad panorama of planning instruments for heritage intervention.

The jury notes that the overall quality of the entries has been good and that they highlight the diversity of approaches to the dissemination of heritage, to different scales (both physical and economic), and to different geographical settings (both local and international). The jury also underlines the importance of a good online presence, including in social networks, in a variety of formats.

WINNERS
Having reviewed and deliberated on the short-listed entries, the jury hereby decides on the winner in each of the four categories of the Award. The jury of each category issues the following verdict:

In Category A the jury proclaims the following entry as the winner:
064A. Conversion of the Bernardas Convent (Eduardo Souto de Moura)
From the six short-listed entries, the jury has decided to grant the award to the conversion project of the Bernardas Convent in Tavira by Eduardo Souto de Moura. The decision has been taken after taking into consideration the special difficulty involved in achieving high architectural quality in a private development, creating a holiday apartment complex without undermining the architectural and heritage qualities of the original convent.

In Category A the jury has decided to award a special mention to the following entry:
068A. Restoration of Es Pi des Català Tower XVIII (Marià Castellò Architect)
For the precision, simplicity and efficacy of the intervention. The jury wishes to recognise smaller-scale heritage interventions with the goal of striking a balance in the Award.

In Category B the jury proclaims the following entry as the winner:
033B. Caramoniña Allotments (Abalo Alonso Architects)
A sensitive approach to settings connected to the landscape, be it natural or productive, stands out in all the short-listed entries. This intervention preserves and highlights an element of social heritage: the productive landscape. The project involves the masterful handling of just a handful of elements through the adoption of a subtle and interwoven approach, magnificently outlining a place and facilitating new routes that keep it active and provide it with an identity that is both new and ancient.

In Category C the jury proclaims the following entry as the winner:
001C. The Special Plan for Heritage Protection of the Ancient Village of Sant Andreu del Palomar (Joan Casadevall Serra)
The jury praises the winning entry of Category C, highlighting its historical and social approach to the neighbourhood, along with its sensitivity to the demands of local residents. It highlights the value of the document in technical and executive planning as a tool to enable intervention in a historical centre while taking into account the morphological structure of the district, its green spaces, typological diversity and the configuration of the street on the basis of its façades. Furthermore, it points out that typological analysis increases knowledge for future interventions and consequently raises the level of protected buildings in respect of the previous plan, highlighting the importance of the popular heritage of the “casas de cos”. Last of all, the jury underlines the championing of natural heritage through the restoration of inner courtyards and green spaces, respecting their domestic nature.

In Category C the jury has decided to award a special mention to the following entry:
004C. Programmatic and Urban Study for the Citröen Building (MS-A / Wessel De Jonge)
The jury considers that it deserves a special mention for tackling the reuse of industrial heritage and the recognition of modern architecture, inserting a new programme committed to a mixture of uses and interventions that engage with the existing building. It’s a project that tackles the complexity of its scale as if it were an urban intervention. Meanwhile, it presents an interesting typological study with a scaled level of intervention.

In Category D the jury proclaims the following entry as the winner:
017D. VerSus: Lessons from Vernacular Heritage to Sustainable Architecture (ESG/ Escola Superior Gallaecia and Partners. Coordinated by Mariana Correia)
The jury has considered that the winning project brings together scientific study and a practical call for forms of construction which while being traditional and heritage-based are truly sustainable and contemporary. With a large and extremely professional multidisciplinary international team, VerSus stands out in particular for the dissemination of vernacular architecture in all sorts of formats and on many levels, which it achieves by raising the awareness of the societies that inhabit it and by reaching out to the international scientific community.

The deliberations having concluded at 20:30, the present minutes have been read out and unanimously approved. The persons present are thanked for their attendance and the session is hereby ended.