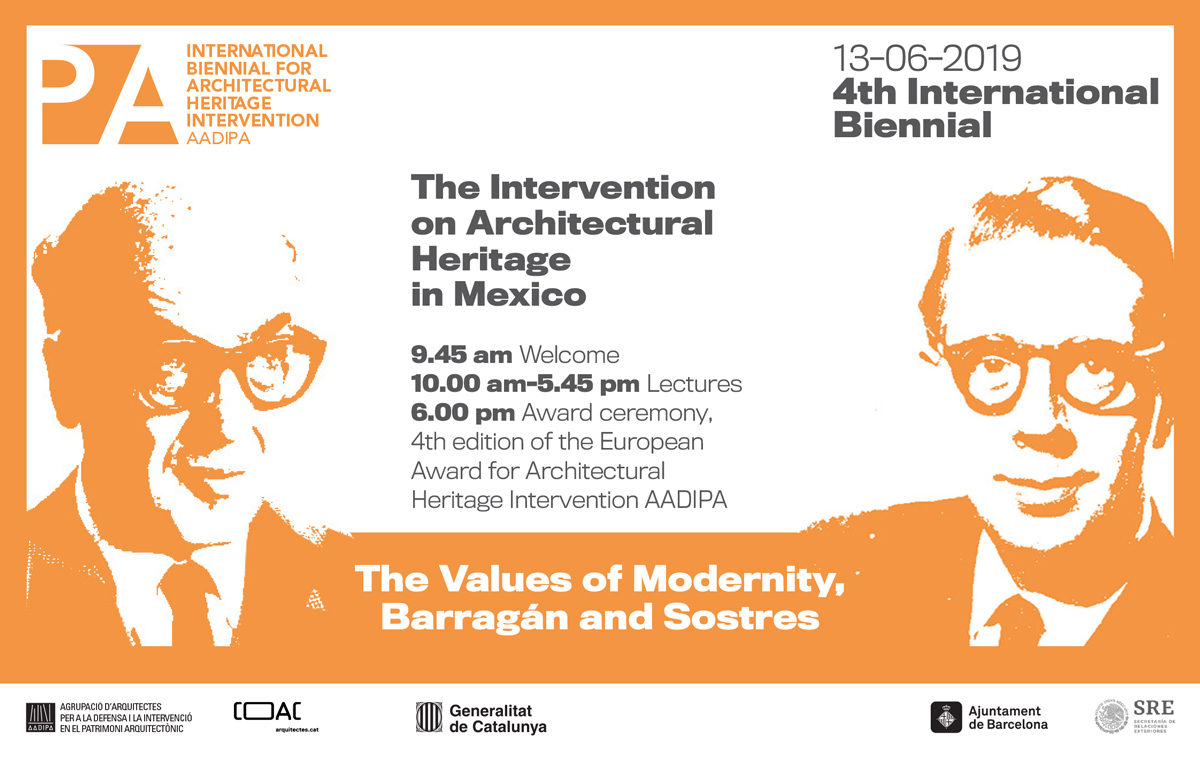 Next Thursday, June 13th, 2019, the fourth edition of the International Architectural Heritage Intervention Biennial AADIPA will be held, with Mexico as the guest country. This new edition of the Biennial, which will take place at the COAC headquarters in Barcelona will be organized around the theme: "The Values of Modernity, Barragán and Sostres".
The Biennial is organized by the European Award for Architectural Heritage Intervention AADIPA, in conjunction with the COAC, AADIPA and the Department of Culture of the Generalitat de Catalunya, and its registration is free of charge. It will involve experts from various disciplines and will be centred around two major themes and purposes: On the one hand, offering a reasoned and critical look at several patrimonial interventions originating in Mexico and, on the other, proposing a thoughtful analysis about the value of domestic architecture in the modern movement, with Luis Barragán as a prime example of this architecture in Mexico and Josep Maria Sostres, the Catalan architect whose work, although not always having received the deserved recognition, is ideal to establish a head-to-head dialogue with Barragán.
The Biennial, yet again this year, will culminate with the official presentation of the awards for the European Award for Architectural Heritage Intervention AADIPA. An act hosted by the journalist, television presenter and radio announcer, Flora Saura, and during which a representation of the international jury for the award will present the finalist works and will announce their decision for each of the four categories of the award.
COMPLETE PROGRAM:
Welcome
9.45 a.m. Presentation of the conference
By:
Ms. Assumpció Puig. President of the Architects' Association of Catalonia, COAC
Ms. Elsa Ibar General Director of Cultural Heritage of the Department of Culture, Generalitat de Catalunya
Mr. Antoni Vilanova. President of the AADIPA
Mr. Ramon Calonge. Member of the board for the European Award for Architectural Heritage Intervention AADIPA
The Values of Modernity, Barragán and Sostres. The Intervention on Architectural Heritage in Mexico
The conference will be conducted by Ms. Anna Goycoolea, archaeologist and anthropologist, Cultural Manager for the Consulate of Mexico in Barcelona and Project Director of the Intangible Cultural Heritage Institute (IPACIM)
Morning: Mexico
10.00 a.m. Analysis of the Interventions on Architectural Heritage in Southeast Mexico.
Speaker: Armando Montejano. Architect, founder and director of Taller Fulano studio and professor at La Salle University and Creative Studio of Cancun.
10.45 a.m. A Global Vision of the Management System of Cultural Heritage in Mexico.
Speaker: Valeria Valero. Architect and National Coordinator of Historical Monuments of the National Institute of Anthropology and History of Mexico.
11.30 a.m. Coffee break
12.00 a.m. Time and Tradition: The Domestic Value of the Architecture of Luis Barragán
Speaker: Mara Partida. Architect, associate professor of projects at ETSAB UPC and co-director of the architecture studio Mendoza Partida.

Watch video >>>>>>>
Award-giving Ceremony
The ceremony will be hosted by the journalist, tv and radio host, Flora Saura
18.00 a.m. Presentation of the finalist projects
By:
Members of the Award management team
Members of the international jury for the fourth edition