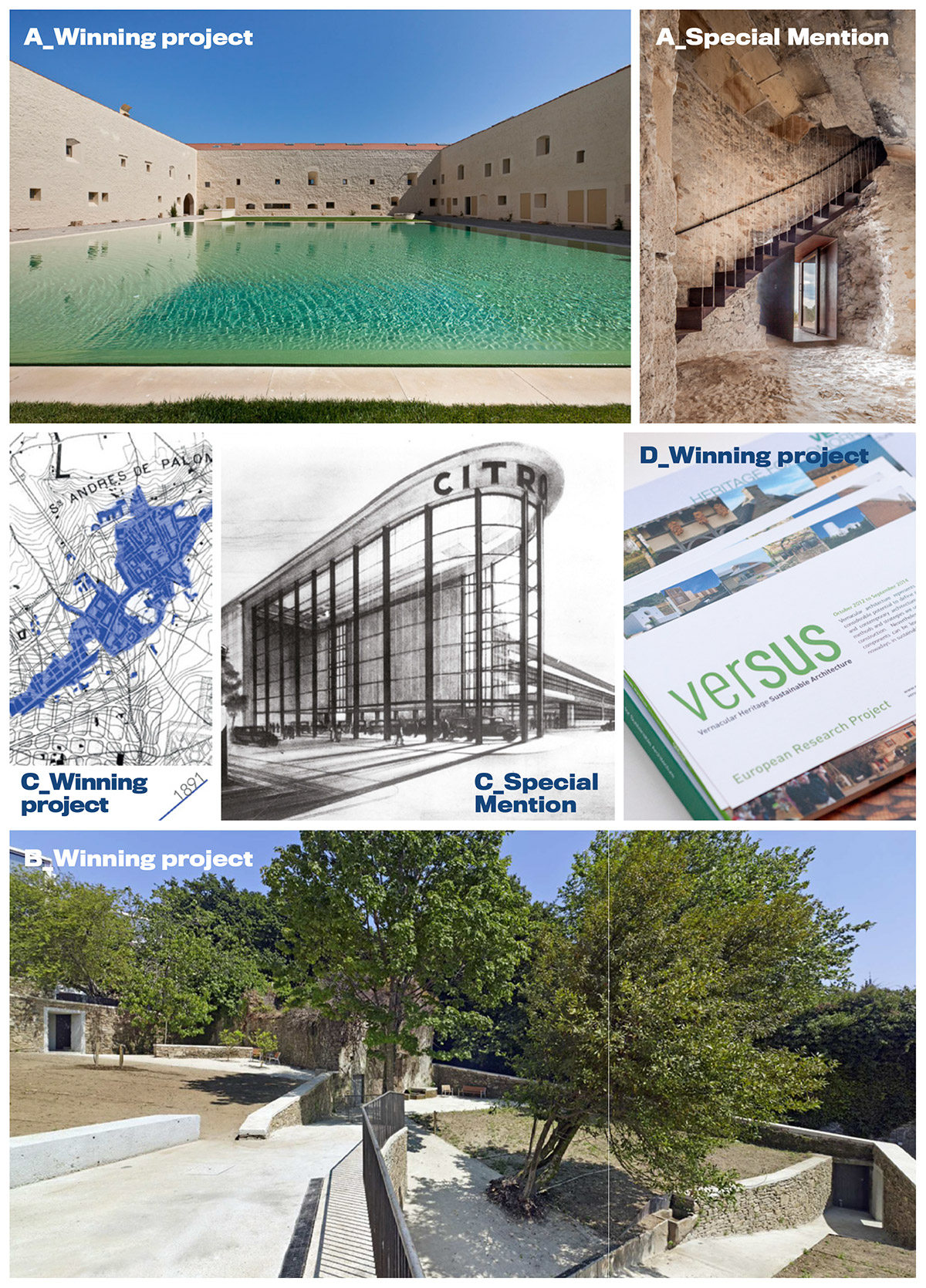 Social aspects, quality and precision, present in the winning entries of the European Award for Architectural Heritage Intervention AADIPA

The winners of the 3rd European Award for Architectural Heritage Intervention AADIPA were announced by the jury today at the COAC headquarters in Barcelona. The announcement of the 18 short-listed projects, from which two special mentions and four winners were chosen, was made during the 3rd International Architectural Heritage Intervention Biennial AADIPA. The awards were presented by Mr Jusèp Boya, Director General of Archives, Libraries, Museums and Heritage of the Ministry of Culture of the Government of Catalonia; Mr Daniel Mòdol, Councillor for Architecture, Urban Landscape and Heritage of Barcelona City Council; Mr Albert Civit, Director of INCASOL (Catalan Land Institute); and Mr Lluís Comerón, Dean of the Association of Architects of Catalonia.
Praising the high overall quality of the submitted entries and highlighting the precision and accuracy with which the interventions approached heritage restoration, the international jury of the award decided on the following winners and runners-up in each of the four award categories:

In Category A) Intervention in Built Heritage, the jury increased the number of runners-up to six due to the high level of participation and quality, diversity of scales, complexity, ambition and sensitivity of the entries. The six short-listed projects were:

From the short-listed entries, the jury decided to grant the award to the conversion project of the Bernardas Convent in Tavira by the Portuguese architect Eduardo Souto de Moura. The decision was taken after taking into consideration the special difficulty involved in achieving high architectural quality in a private development, creating a holiday apartment complex without undermining the architectural and heritage qualities of the original convent. Furthermore, the jury decided to award a special mention to the restoration of the Es Pi des Català Tower in Formentera, by Marià Castellò, due to the precision, simplicity and efficacy of the intervention. The jury has recognised smaller-scale heritage interventions with the goal of striking a balance in the award.

In Category B) Outdoor Spaces, four works were short-listed:

The jury decided to grant the award in Category B to the Caramoniña allotments project, by Abalo Alonso Architects. This intervention preserves and showcases an element of social heritage: the productive landscape. The project involves the masterful handling of just a handful of elements through the adoption of a subtle and interwoven approach, magnificently outlining a place and facilitating new routes that keep it active and provide it with an identity that is both new and ancient.

In Category C) Urban Planning, the four short-listed entries were:

The winning entry in Category C was the Special plan for the heritage protection of the ancient village of Sant Andreu del Palomar, by Joan Casadevall. The jury highlighted the historical and social approach adopted in the project, along with its sensitivity to the demands of local residents. The project attaches great importance to the value of the document in technical and executive planning as a tool to enable intervention in a historical centre while taking into account the morphological structure of the district, its green spaces, typological diversity and the configuration of the street on the basis of its façades.
In this same category, the jury considered that the Programmatic and urban study for the Citröen building, by the Belgian team of MS-A / Wessel De Jonge deserved a special mention for tackling the reuse of industrial heritage and for its recognition of modern architecture, inserting a new programme committed to a mixture of uses and interventions that engage with the existing building.

In Category D) Dissemination, the four short-listed entries were:

The winning entry was VerSus: Lessons of vernacular heritage in sustainable architecture, by the ESG / Escola Superior Gallaecia and Partners, coordinated by Mariana Correia (Portugal). The jury considered that the project brought together scientific study and a practical call for forms of construction which, while being traditional and heritage-based, are truly sustainable and contemporary. With a large and extremely professional multidisciplinary international team, VERSUS stands out in particular for the dissemination of vernacular architecture in all sorts of formats and on many levels, which it achieves by raising the awareness of the societies that inhabit it and by reaching out to the international scientific community.

The deadline for the call for entries for this third award was 28 April and the international jury made up of renowned experts in the field of intervention in Architectural Heritage has spent the time since then evaluating the entries to the four award categories. In Category A (Intervention in Existing Architectural Heritage), the architects Inês Vieira da Silva, Ignacio Pedrosa and Marc Aureli Santos evaluated 124 projects. In Category B (Exterior Spaces), the experts Ian Mcknight, Celestino García Braña and Pere Buil analysed 35 entries. In Category C (Planning), the professionals Alessandro Alì, Carles Enrich and Cristina Mata evaluated 11 entries, while in Category D (Dissemination), Carsten Hanssen, Fernando Cobos and Montserrat Villaverde studied 19 projects.
The 3rd European Award for Architectural Heritage Intervention AADIPA has been directed by Ramon Calonge, Oriol Cusidó, Marc Manzano and Jordi Portal (member architects of the AADIPA). The international character of the award has been consolidated with a large number of entries from abroad. Moreover, the overall quality of the entries has served to further strengthen its reputation and ratify its continuity.